Fun Time: THE TALE OF THE THIRSTY LEOPARD 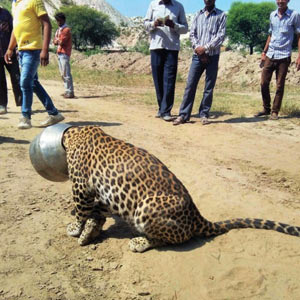 What would you do if you came across a leopard with its head stuck in a metal water pot? Perhaps you and your friend would run to help the poor animal.

Friend: “I’ll grab the pot and pull. You grab the leopard and pull.”

Perhaps you wouldn’t run to help the poor animal, but would instead whip out your cellphone and call wildlife officials to help. That would be a smart thing to do, wouldn’t it?

Well, some villagers in Rajasthan did indeed come across a leopard with its head stuck in a water pot recently. And they did what people tend to do these days: they pulled out their cellphones and took photos and video of the animal in distress.

Villager: “I’m going to put this on Facebook. My friends won’t believe it.”

Second villager: “Facebook? That’s so small-minded of you. I’m going to sell the video to a TV network for one lakh. It’s not every day that you see a leopard with its head stuck in a pot.”

Third villager: “You two are so uncaring! Can’t you spare a thought for the poor leopard? He must have been really thirsty to put his head into a water pot like that. And just imagine what he’s thinking now. ‘Someone help me! My head suddenly feels very heavy, I’ve lost my eyesight, and I’m hearing lots of clicking sounds.’”

The leopard spent five hours with the metal pot around its head, according to a Reuters report. Thankfully, someone in the village of Sardul Kheda called for help. Forestry department workers showed up, tranquilized the leopard and removed the pot from its head. The leopard was moved to a safe enclosure and examined by a veterinarian, who declared that it had been “fully cured of utensilitis.”

As far as I’m concerned, it should fall under the latter. Animals, just like humans, need safe drinking water. They shouldn’t have to put their heads in strange objects to quench their thirst.

Many years from now, the leopard incident may be turned into a children’s tale, with a little embellishment:

Once upon a time, there was a very thirsty leopard. All the streams and rivers were dry, so he sent his wife to get some water from a nearby village. “The humans keep their water in metal pots,” he told her.

“How will I bring the water back?” she asked.

“Just bring back the whole pot.”

“How will I carry the pot?”

“Use your head. Haven’t you seen how humans do it? They balance it on their heads.”

The leopardess went to the village and found a water pot that was unguarded. But when she looked inside, it didn’t seem to have any water. Luckily there was a helpful crow nearby. “The pot isn’t empty,” the crow said. “There’s a little water at the bottom. You just can’t see it.”

“How should I get the water?” the leopardess asked. “Should I drop some stones inside until the water comes up?”

“No,” said the crow. “Just stick your head in, as deep as it will go. Not only will you reach the water, you will be able to carry the pot home over your head.”

The trusting leopardess put her head in the pot. She didn’t find any water there and her head got stuck.

“In a minute,” the crow said, laughing. “First I want to take some photos, so I can post them on Facebook.”