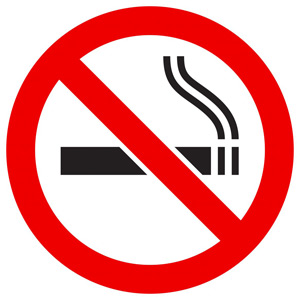 Smoking can be extremely harmful to your health. That’s why almost every country in the world requires tobacco companies to put warnings on cigarette packets. In the United States, for example, you may see a message that says “Surgeon General’s Warning: Smoking causes lung cancer, heart disease, emphysema, and may complicate pregnancy and your ability to get a date.”

Such warnings are somewhat ineffective, partly because the people who need the warnings the most are the least likely to read them. Some of them can’t read, while others don’t like to read, especially when they see big words such as “Surgeon” and “General.”

Anti-smoking advocates tried to solve this problem by creating “talking” cigarette packs that play messages from embedded sound chips whenever the packs are opened, but when these “talking” packs were tested on 1,000 smokers chosen at random, almost one-tenth of them suffered heart attacks and died. About 40 percent of them dropped the packs and ran away screaming, while the remaining half closed the pack as soon as they heard the words “Surgeon General” and tore an opening at the bottom to remove their cigarettes.

“I don’t want my cigarette packs nagging me,” one man said. “I get that enough from my wife.”

In many other countries, including India, the problem of people not reading warnings has been solved by putting scary pictures on cigarette packs. In North Korea, for example, every cigarette pack comes with a picture of Kim Jong-un. Beside the picture of the supreme leader is a highly effective message: “I kill you if you smoke.”

Not all countries can do that, of course. Canada tried it, but most smokers just laughed when they saw a picture of Stephen Harper.

Another image from the Canadian province of Quebec has proven to be far more effective. It shows a woman whose gums have worn away, exposing the roots of her decaying teeth. Beside the image is a warning that says “La cigarette cause une forte dépendence et nuit à la santé.” I don’t speak French, but I assume that it means, “Smoking cigarettes can make you look like you get dental care in Britain.”

Canada was the first country to require graphic health warnings on cigarette packs in 2001 and more than 40 countries have done the same. Many of them require half the space on a cigarette pack to be filled with health warnings. One country, Australia, has gone even further, banning logos, colours, and promotional texts from cigarette packs, and filling most of the space with graphic warnings. A variety of warnings appear on the packs, such as “Smoking clogs your arteries,” “Smoking doubles your risk of stroke,” and “Smoking causes more pain than losing to India in cricket.”

If it were up to me, the warnings on cigarette packs would be much longer: “Smoking causes lung cancer, stomach cancer, bladder cancer, and various other cancers that are listed on the side of each cigarette in this pack. Smoking puts you at greater risk for heart disease, emphysema, diabetes, and various other diseases that, along with cancer, will make you look scarier than the man pictured on the front of this pack, supreme leader of North Korea. Smoking can harm nearly every organ of your body—yes, even that organ!—so please try your best to quit smoking. You will not only improve your health, you will also improve your wealth. Cigarettes can be costly—not just the price you pay when you buy them or the price you pay for healthcare, but also the price you pay when you accidentally set your home on fire. Yes, smokers cause hundreds of fires every year: some lose their entire homes, some lose prized possessions, and some lose their eyebrows. Losing your life, your home,