FUN TIME: WORLD’S LARGEST SAMOSA: WHY DIDN’T I GET SOME? 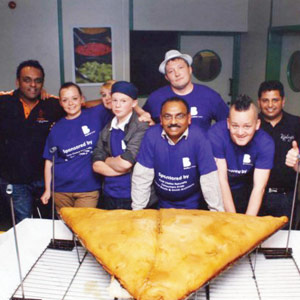 Muslim Aid UK recently set a Guinness World Record for the world’s largest samosa. They made the 153.1 kg samosa at a mosque in East London.

According to Guinness, a dozen volunteers from the humanitarian charity took 15 hours to create the samosa. It was made from 100 kg potatoes, 25 kg onion, 15 kg peas, 44 kg flour, and traditional Indian spices. That adds up to 184 kg of ingredients for a 153.1 kg samosa. Either my math is wrong or the volunteers did a little eating while they cooked. If they did, I wouldn’t hold it against them. It’s virtually impossible to resist a samosa of that size.

Unfortunately, when I heard about the huge samosa, it was too late. I didn’t have time to fly to London to celebrate the world record by helping myself to the samosa. All I could do was write a letter to Muslim Aid UK:

First let me congratulate you on making the world’s largest samosa. I heard that you shattered a record previously held by Bradford College in Bradford, England. The college made a samosa weighing 110.8 kg in 2012, which means that you outdid them by 42 kg.

Perhaps you don’t believe that I could eat a 153.1 kg samosa. Well, let me tell you, throughout my life, there has never been a samosa placed in front of me that I wasn’t able to finish.

I love samosas. A samosa is the world’s most perfect snack. I feel sorry for all the people in the world— and there are billions of them—who haven’t yet discovered the samosa. In your own way, you are helping to spread the samosa message.

I’m impressed that you didn’t let the world-record samosa go to waste. You cut it into pieces and gave it to the Salvation Army, so it could be distributed to homeless people. I’m not sure how many homeless people were lucky enough to eat the samosa, but perhaps you set a world record for “highest number of people saved from hunger by a single samosa.”

Samosas are a great way to fight hunger. I wish more charitable organizations would cook samosas to distribute to homeless people, as well as people like me who love samosas. Samosas are a great way to show people that you care about them. That’s what I always tell my relatives. But have they ever bothered to cook me a 153 kg samosa? Oh no, not even a 1.53 kg samosa.

Samosas are popular not just in India, but in other parts of Asia, as well as the Arabian peninsula, the Horn of Africa, North Africa, and South Africa. In some countries, a samosa is known by a slightly different name, such as somosa, sambusa, sambuksa, samsa, samuza, sambosa, and of course “some more, sir.”

I always thought that samosas originated in India, but according to Wikipedia, they originated in the Middle East and were brought to the Indian subcontinent in the 13th or 14th century by traders from Central Asia. I’m not sure how samosas made their way to the UK, but it wouldn’t surprise me to learn that the British East India Company was behind it.

Congratulations again, Muslim Aid UK! You have done a great service by cooking the world’s largest samosa, but I hope you won’t allow another organization to break your record. Please break it yourself before someone else does. And this time, please invite me. I will entertain everyone by performing a magic trick: making the samosa disappear.