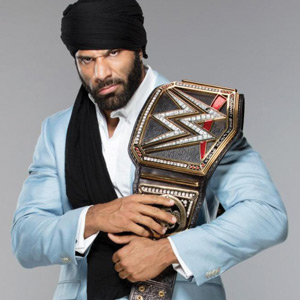 Mahal, 30, a native of Calgary, Canada, is the second WWE heavyweight champion of Indian descent, following the Great Khali, who held the title for 61 days in 2007.

Mahal beat Orton with help from The Singh Brothers (Samir and Sunil Singh), whose real names are Gurvinder and Harvinder Sihra. The brothers, who hail from Burnaby, British Columbia, have also wrestled professionally under the names The Bollywood Boyz and The Bollywood Lions.

Mahal first joined the WWE in 2011, but was released from his contract in 2014. He had to wrestle on the independent circuit for two years before re-signing with WWE.

“To become the WWE champion, you need confidence in yourself, in your ability,” Mahal told ESPN. “You have to have confidence when you speak. When you start to look backward, that’s when the confidence begins to weaken. That’s not me. Not anymore.”