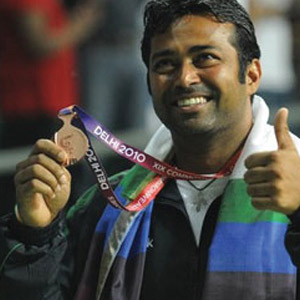 It almost happened: two Indians facing each other in a grand slam tennis final. Alas, Sania Mirza and her Brazilian partner, Bruno Soares, lost in the Australia Open mixed doubles semi-final to the French-Canadian duo of Kristina Mladenovic and Daniel Nestor.

But Indian tennis fans got to celebrate anyway, as Leander Paes and Swiss star Martina Hingis cruised to an easy 6-4, 6-3 victory over Mladenovic and Nestor in the final.

It was the 15th grand slam title for the 41-year-old Paes, who has won eight titles in men’s doubles and seven in mixed doubles, not to mention an Olympic bronze medal in singles. He has demonstrated his doubles prowess by winning with different partners, including three-time Australian open champ Hingis and nine-time Wimbledon champ Martina Navratilova.

“It’s awesome to have played with both Martinas and won Slams with each of them,” Paes told Times of India.