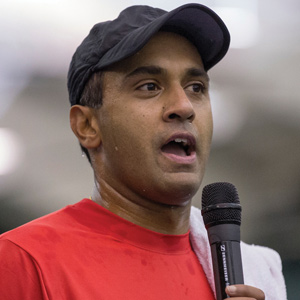 When Bob and Mike Bryan, the top men’s doubles team in tennis, withdrew from the American Olympic team, citing health concerns, it opened a spot on the team for Rajeev Ram of Indiana, ranked 25th in the world in doubles.

He and four-time Olympic gold medalist Venus Williams won three mixed-doubles matches to reach the final in Rio, where they lost to fellow Americans Bethanie Mattek-Sands and Jack Sock in a third set tiebreaker.

Ram, who has won nine doubles titles and two singles titles in his professional career, will cherish his silver medal and the Olympic experience.

“To be on a team and to play for your country, and to play for something bigger than yourself is special,” Ram told the Indianapolis Star. “And, obviously, to win a medal is right up there with anything else I have done.”