COVID-19  In-depth info for Indians in Atlanta/Georgia. Click here
Home > Magazine > ChaiTime > Good Sports: A Role Model for Hindus and Everyone Else

Good Sports: A Role Model for Hindus and Everyone Else 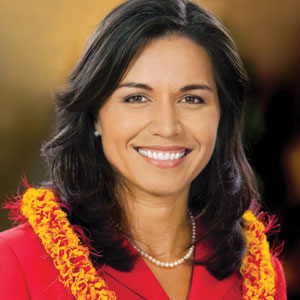 Rep. Tulsi Gabbard of Hawaii is the first Hindu to serve in the House of Representatives and has become a sought-after speaker at Indian-American events. “From California to Houston to Chicago, Gabbard has been finding enthusiastic crowds of Indian-Americans, who despite the fact that she is not Indian, feel the pride of seeing one of their own for the first time in Congress,” wrote Kery Murakami of the Honolulu Civil Beat.

In June, she attended the first Dharma Bee in Chicago and presented prizes to the winners. She also spoke at the Hindu Youth Awards Gala in Houston in July, attended the American Association of Physicians of Indian Origin Convention in Chicago in May, and will be the keynote speaker at the Hindu American Foundation gala dinner in California this month.