Good Sports: Another Win for Bhupathi 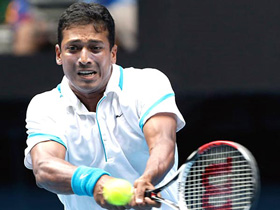 Among the winners at Wimbledon last month was Indian doubles star Mahesh Bhupathi. No, he didn’t win a fourth Wimbledon doubles title, but he did sit in the friends box at Centre Court and watch his new client, Andy Murray, become the first British man to win the singles title in 77 years. Just a few months earlier, Bhupathi’s company, Globosport, signed a deal to represent Murray’s commercial interests in Asia and the Middle East. Bhupathi, who has won 12 Grand Slam doubles titles in his career, tweeted a photo of himself kissing the singles trophy, saying, “Got my hands on this amazing trophy for a few seconds courtesy @andy_murray.” It’s certainly an amazing trophy, but Bhupathi, who is expected to retire at the end of this year, has got his hands on many other trophies in his career. Not including Lara Dutta, of course.