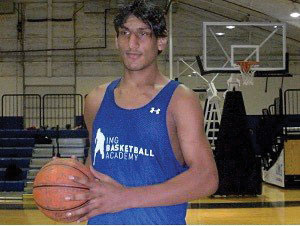 When Yao Ming joined the Houston Rockets in 2002, the National Basketball Association suddenly had a billion more followers in China. Now the NBA is hoping that Satnam Singh Bhamara does the same for India.

Satnam, aged 17 and almost seven-foot-two, has been training for a potential basketball career at IMG Academy in Bradenton, Florida. Pete Thamel of Sports Illustrated recently wrote about him and the NBA’s plans in an article titled “Wanted: 1.2 Billion Basketball Fans.”

“It’s the largest untapped basketball market in the world,” Bobby Sharma, IMG’s senior vice president for global basketball, told SI. “If Satnam’s potential gets him to the NBA, that’ll be good for a lot of people—especially Satnam.”

If Satnam becomes even a bench warmer for an NBA team, playing a few minutes a game with the likes of Kobe Bryant and LeBron James, that might be enough to propel basketball into the limelight in India. The 300-pound youth, the son of a Punjab farmer of similar height, understands the influence his career could have on countless youngsters. “Even after I retire, I want to make sure there’s a young generation that continues the popularity of basketball in India.”