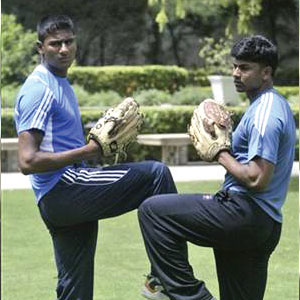 It was one of the best sports stories of 2008: two young Indian men had been selected to come to America to train as baseball pitchers. The duo, Rinku Singh and Dinesh Patel, had finished first and second on an Indian reality show called Million-Dollar Arm, created by a sports agent who hoped to find the next Nolan Ryan in the land of 1.2 billion.

The story got even better when Singh and Patel, following their training in Los Angeles, tried out in front of 20 Major League Baseball scouts and were signed by the Pittsburgh Pirates, becoming the first Indians to put their names on professional baseball contracts. The Pirates sent the pair to pitch for their minor league affiliate Gulf Coast Pirates in Bradenton, Florida.

Both earned victories during their rookie seasons in 2009, but three years later, both have left America. Patel’s pitching career went under (he was released in December 2010), while Singh’s went down under. He has spent the last two seasons in the fledgling Australian Baseball League, most recently with the Adelaide Bite.

Patel is back in India, still feeling lucky that he got to shake hands with Barack Obama.