Good Sports: Shooting For The Top 60 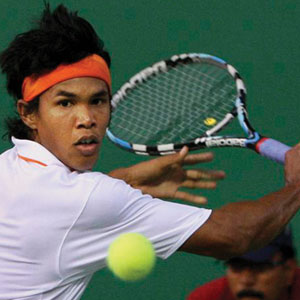 “I play tennis & love eating. Bad/enthusiastic musician,” reads the description on Somdev Devvarman’s Twitter account (@SomdevD). At number 90 on the ATP tour, he’s India’s top-ranked singles tennis player. But after winning two consecutive NCAA singles titles at University of Virginia in 2007 and 2008, much more was expected of him than being just a Top 100 player. If not challenge for Grand Slam titles, he was expected to at least create some buzz at those events, not lose in the second round, as he’s done several times.

But at 28, Somdev, fully recovered from a shoulder injury that curbed his progress in recent years, still has a half decade or more to live up to the promise of his NCAA achievements. His short-term goal is to reach the Top 60, beating his highest career ranking of 62.

“I have certain goals that I want to accomplish,” he told PTI. “First of all, if I stay injury-free in 2014, I can have a good year. I have been working hard to get stronger, to make sure that I don’t have injuries. If that happens, I would like to make a run in a Slam, compete harder with the top 20 guys, top 30 guys and maybe have a few more wins over there.”