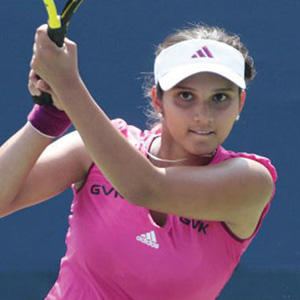 It’s customary to short-list authors for literary prizes, allowing several of them to be honored before one receives the prize. But short-listing tennis players isn’t quite so common. Then again, how often is a prize as enticing as Sania Mirza, India’s top female player—or at least the opportunity to be her partner at the London Olympics? “We have short-listed Kyra Shroff, Sharmada Balu, Rituja Bhosle, and Prerna Bhambri who will be called for a camp here ahead of the Olympics. One of them will partner Sania,” Anil Khanna, secretary general of All India Tennis Association, told the Indo-Asian News Service. That will sort out India’s women’s doubles entry, but who will play mixed doubles with Sania? Well, it’s an even shorter list: Leander Paes, Mahesh Bhupathi and Rohan Bopanna. “She has played well with all the three,” Khanna said. “She won the Australian Open title with Mahesh, Asian title with Leander, and has done well with Rohan in Hopman Cup.” The winners will be announced by June, but if you’re eager to make your Olympic banner, you can’t go wrong with this: “Go Sania and partner!”