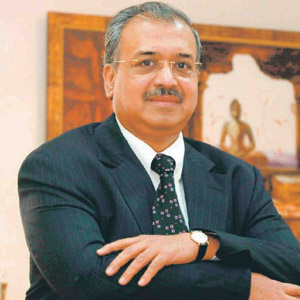 Dilip Shangvi, founder and managing director of Sun Pharmaceutical Industries Ltd., has a net worth of $21.6 billion, edging out Mukesh Ambani for the title of India’s richest man, according to the Bloomberg Billionaires Index. That means Shangvi has enough wealth to give $17 to every man, woman, and child in India, with enough left over to buy an NBA franchise.

Unlike Ambani, Shangvi did not inherit his wealth, but created it himself by starting the pharmaceutical company in the early 1980s, after graduating from University of Calcutta. The soaring price of Sun Pharma’s stock has boosted Shangvi’s wealth by $4.5 billion this year, making him the richest pharmaceutical billionaire in the world and fourth richest overall in Asia, according to Bloomberg.

Ambani has added “only” $153 million to his wealth this year, so it won’t be long before someone starts an Internet crowdfunding campaign called “Please help Mukesh Ambani become India’s richest man again.”