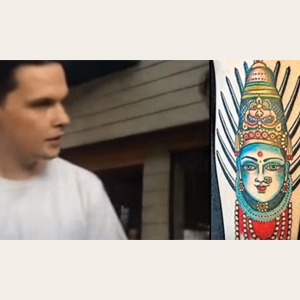 An Australian tourist got in trouble recently when he was spotted in Bengaluru with a tattoo of the fertility goddess Yellamma on his shin. Yellamma (also known as Renuka) is a Hindu goddess revered in South India.

A group of right-wing activists took issue with the tattoo largely because it was on 21-year-old Matthew Gordon’s leg. Had it been on his arm or neck or any other body part above the waist, they might have let it pass.

But since it was on his leg, they not only harassed him, but also got the police involved. Gordon was taken to the police station and detained for three hours. He was released only after writing a letter of apology promising to keep his tattoo covered in India.

Perhaps he should have made a few other promises, too:
1. I promise not to get any more tattoos of Hindu gods and goddesses without the express permission of India’s Union Minister of Communications, Information Technology, and Body Art.
2. I promise to warn other tourists not to travel to India without first having their tattoos approved at the nearest Indian Embassy.
3. I promise to pray to Yellamma to forgive the people who harassed me.

Gordon, a law student who has spent three years in Tamil Nadu, was trying to honor the goddess with the tattoo. He also has a tattoo of Ganesh on his back.

“These tattoos mean a lot to me,” he told The Hindu. “I’m not sporting them because of their exoticism. I know the mythology and the values of the gods inked on me.”