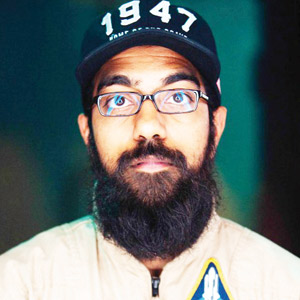 Several years ago, Arjun Ivatury was a student at University of Maryland, College Park, majoring in neurology and physiology and aiming to become a medical doctor. That seemed like a realistic goal for the Indian-American student, except that he was harboring another goal: to be a hip-hop producer.

He participated in beat battles and met rapper Logic on Twitter. Logic, whose real name is Sir Robert Bryson Hall II, remembered Ivatury from the beat battles and asked the aspiring producer to send him some beats.

But Ivatury didn’t give up. “I kept sending him more beats and he liked this one beat in particular that went on his first project and ever since then, we’ve become homies.”

Only 26, Ivatury, who goes by the name of 6ix as a music producer, has since produced more than 35 songs for Logic. One of their newer songs, which they co-wrote with Alessia Cara and Khalid, has won them a Grammy nomination for Song of the Year.

Titled “1-800-273-8255”—the phone number of the National Suicide Prevention Lifeline—the song follows the thoughts of a young man struggling with his sexuality. He contemplates suicide, but decides to keep fighting, keep living.