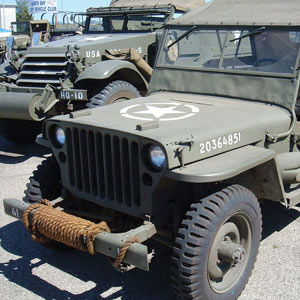 As a cardiologist at Mayo Clinic in Minnesota, Dr. Guri Sandhu spends his days helping patients regain their health. In his spare time, he’s been bringing World War II Jeeps to life.

Sandhu spent about two years restoring a 1945 Willys MB Jeep that had been kept in someone’s barn for several decades.

“Once I got it home, I had to take the whole thing apart,” Sandhu recently told KTTC TV. “For six months, there was no Jeep. It was all in little Ziploc bags with carefully labeled parts. And it took about 18 months to slowly restore all the parts, find old parts, and then rebuilt it up from the ground up.”

After restoring the Jeep, Sandhu marked the front bumper “11 Sikh” to honor the 11th Sikh Regiment of the British Indian Army.

“There were millions of Americans and about two-and-a-half million Indians who fought in the same battles—whether it was North Africa or Europe or Burma, Southeast Asia,” Sandhu told KTTC.

The 56-year-old doctor, who has restored two Jeeps and is working on a third, wants to pay tribute to the millions who served during the war, “To think about the contributions of the young men and women who fought for freedom, not just in one country but in multiple countries—an entire group of people across the commonwealth,” he said.

He enjoys driving the 1945 Willys MB Jeep around and even displayed it at a car show on July 4.

“I think my favorite part is just the fact that it actually runs after so many years, and also the reactions from people,” Sandhu said. “Anytime you go to a crowded place, people absolutely love it—lots of waving, honking, smiles.”