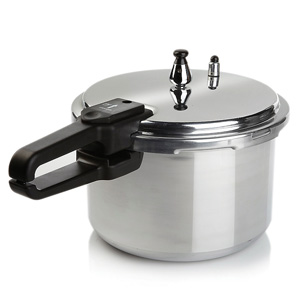 Imagine that it’s 2012 and you’re going through customs at New York’s JFK Airport, having just arrived from India. An officer decides to open your suitcase and finds a pressure cooker. “It’s for my mother,” you say. “She wanted me to bring one from India.”

Ah, those were innocent times, weren’t they? Nowadays, following the Boston Marathon bombings, you’d probably be detained at the airport, perhaps subjected to a battery of questions, such as “Are you sure this is for cooking?” and “Has your mother exhibited any unusual behavior lately?”

The perpetrators of the Boston bombings packed explosives into pressure cookers, making them far more powerful and prompting many people to view pressure cookers in a different light. Actress Mia Farrow tweeted, “I can’t even look at my pressure cooker.” Fagor America Inc., the company that made the pressure cookers, issued a statement saying that its products “are not intended to be used for any other purpose other than cooking.”

In Red Bluff, California, a pressure cooker left in front of a shopping center caused great concern. Businesses were closed and the Shasta County Bomb Squad was called in, according to the Red Bluff Daily News. Thankfully, nothing was inside, not even a hot curry.

Pressure cookers are almost essential items in Indian-American kitchens, but if you happen to own one, please don’t carry it around in public—even if you’re taking some hot food to the community potluck dinner. You might cause widespread panic, and end up on the front page of your local newspaper with the headline: “Pressure-Cooker Suspect Admits Trying to Cook Up Something.”