SKYDIVING IN A SARI 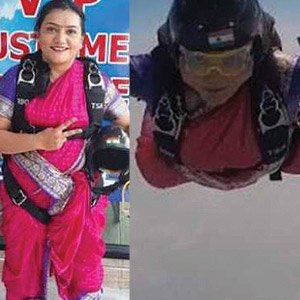 Shital Rane-Mahajan, a skydiving ace from Pune, became “the first Indian to skydive sporting a colorful ‘Navwari sari’ in Thailand,” according to a report by the Indo-Asian News Service.

Not only is skydiving an impressive feat, so is wearing the Maharashtrian-style ‘Nav-wari sari.’ It’s 8.25 metres long, about 50 percent longer than a typical Indian sari.

“I wanted to prove that Indian women can not only carry the sari graciously in their routine lives, but can also use it for high adventure like skydiving,” Rane-Mahajan told IANS.

The 35-year-old didn’t skydive just once in her sari—she actually did it a second time, thanks to favorable weather conditions. Her dedication to her sport is amazing. It’s no wonder that the mother of two has set 18 national skydiving records, as well as six international records. Over the last decade, she has completed 704 jumps on all seven continents. She has skydived in both the North Pole and South Pole, and set a record as the youngest woman (age 23) to skydive over both poles.

When she married her husband, Finland-based engineer Vaibhav Rane, in 2008, they set a national record: first couple to tie the knot in a hot air balloon, about 600 feet above ground. Her parents and the priest were also in the balloon. (The advantage of having a wedding in a hot air balloon is that if the groom changes his mind at the last minute, there is nowhere to run.)

Her husband is a skydiver too, and in 2011, they became the first Indian civilian couple to skydive together. It was just one more achievement in her storied career. Her Wikipedia page, as you can imagine, is very long—almost as long as her sari.