COVID-19  In-depth info for Indians in Atlanta/Georgia. Click here
Home > Magazine > ChaiTime > “THANKS, OBAMA” – AND WE MEAN IT 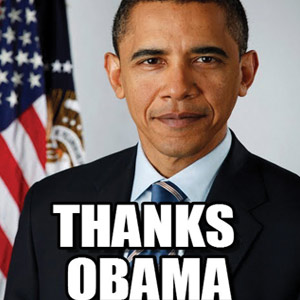 “Thanks Obama” is a popular Internet meme in which the president is thanked for any and all problems. For example: “My toast got burnt this morning. Thanks Obama!” and “Atlanta Falcons defense gets worse every year. Thanks Obama!”

Well, people in Agra had good reason to thank Obama recently. He was scheduled to tour the Taj Mahal during his three-day visit to India, but had to cancel plans so he could visit Saudi Arabia following the death of King Abdullah. The cancellation came too late to prevent a cleaning crew of 600 people from sprucing up the monument and its vicinity in anticipation of his visit. The streets were swept, spit stains scrubbed away, and trash removed from the Yamuna River.

“He might not be going to Agra, but thanks to Barack Obama, at least the city has been cleaned up,” tweeted TV news anchor Padmaja Joshi.

Another Twitter user (@sankararaman) is hoping for more clean-up efforts. He tweeted: “@BarackObama When are you cancelling your trip to Chennai?”