THE PERSISTENT PROBLEM OF POTHOLES 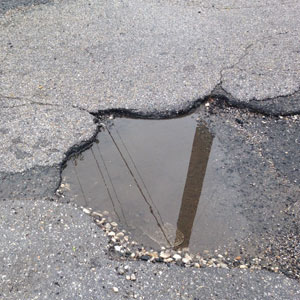 Potholes aren’t too common on American roads, but they’re common enough that even the president feels the need to address them. During a recent speech on his plan for America’s infrastructure, President Trump said, “American trucks will glide along our highways—so beautiful will those highways be—smooth, beautiful, no potholes.”

Politicians everywhere have been making similar promises, but potholes tend to reappear. At least American motorists don’t have to deal with as many potholes as Indian motorists do. The extent of the problem was underscored in early October when Karnataka Chief Minister Siddaramaiah ordered the Bengaluru Municipal Corporation to fill all the potholes in the city within 15 days. According to one report, 17,000 potholes needed to be filled. Several fatal accidents, caused partly by potholes, prompted Siddaramaiah to take action.

So Bengaluru is now pothole-free, right? No, not quite. Siddaramaiah had to extend the deadline to early November. But while those potholes were being filled, many more likely appeared. Perhaps Siddaramaiah needs to call Trump and find out exactly how to create roads that are “smooth, beautiful, no potholes.” It might be as easy as building a wall.