THE VOICE OF APU STEPS AWAY 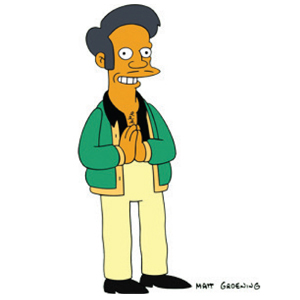 Apu Nahasapeemapetilon, the heavily accented convenience store clerk on “The Simpsons,” has been a prominent figure on the animated TV series since 1990, but his days may be numbered—at least that’s what critics of the stereotypical character hope.

Hank Azaria, the actor who has given voice to Apu since the character was introduced, has decided to no longer do so. Azaria had spent years exploring his own feelings and those of others who consider Apu a demeaning representation of Indians.

“Once I realized that that was the way this character was thought of, I just didn’t want to participate in it anymore,” Azaria told The New York Times in a recent interview. “It just didn’t feel right.”

In 2017, comedian Hari Kondabolu produced an hour-long documentary called The Problem with Apu, underscoring the harmful stereotype that Apu perpetuates.

“You start to feel embarrassed to be an Indian,” Kondabolu said. “Because there’s only one representation.”

The representation is so pervasive that when Indian Prime Minister Narendra Modi arrived in Buenos Aires for the G20 summit in 2018, an Argentine TV station showed Modi’s plane, as well as a picture of Apu with the headline “Apu Arrives.”

Whether Apu survives for another season, voiced by a different actor, is anyone’s guess. Matt Groening, creator of The Simpsons, has so far been unfazed by the criticism of Apu.

“We love Apu. We’re proud of Apu,” he told a young fan at a Disney expo last August.