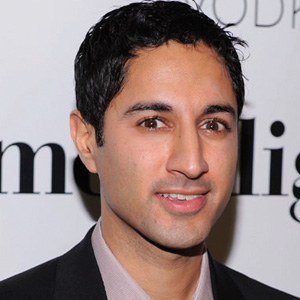 Maulik Navin Pancholy, whose parents are immigrants from India, had wanted to be an actor since early childhood and spent years preparing for that goal. After earning his high school diploma in 1991 from Berkeley Preparatory School in Tampa, Fla., he went to Northwestern University and earned a bachelor’s degree in theatre in 1995. But he didn’t stop there. In 2003, while still auditioning for and playing small roles, he graduated from Yale University School of Drama with a master’s degree in acting.

After doing a number of guest spots in TV and film, he got his big break in 2005 when he landed a recurring role on Showtime’s Golden-Globe-winning comedy Weeds. A year later, he was cast in the NBC comedy 30 Rock, playing the role of Jonathan, an assistant to Jack Donaghy, the network executive played by Alec Baldwin.

Pancholy has also lent his voice to the character Baljeet, a nerdish Indian boy on Disney’s animated show Phineas & Ferb.

PANCHOLY BY THE NUMBERS

“When I was an undergrad at Northwestern, there was definitely a part of my cultural identity that I shied away from, that I was very distanced from – and that was the Indian part of me.”

“When I got to L.A., suddenly this thing that I’d spent the last four years of my life denying about myself, the fact that I was not white, I was brown, was the only thing people saw about me … I’d go to a casting session and meet a casting director and they’d be like, ‘You’re brown, that’s awesome, we never have anyone to play the Indian part.’”

“There’s a lot more people of color in the industry now. There’s certainly a lot more South Asians. I see that at every audition I’m at. I’m like, ‘Go home! Stop stealing my parts!”’

PANCHOLY ON THE WEB

http://tinyurl.com/3vrh3aj
Pancholy talks about his cultural heritage in this funny YouTube video.

http://tinyurl.com/4yrmk9r
Pancholy talks about Hollywood’s portrayal of diversity in this YouTube video.