THE UGLY INDIAN GETS A FACELIFT 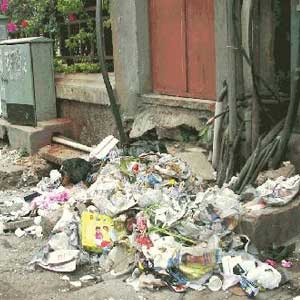 An anonymous group called The Ugly Indian is organizing cleanup drives in Bangalore, mobilizing volunteers to spruce up parts of the city where garbage has been dumped, walls have been stained and pavements have crumbled. “It’s time we admitted that many of India’s problems are because many of us are Ugly Indians,” the group says on its website, TheUglyIndian.com. “We tolerate an incredible amount of filth.”

The group believes that Indians lack civic sense, wherever they live in the world. “Streets in Indian-dominated suburbs overseas are good indicators of this lack of civic sense,” the group says. “Ask those who have visited Southall (London), Edison (New Jersey) and Little India (Singapore). It’s time for us Ugly Indians to do something about this.”

Not all Indians are ugly, of course. Some are working hard to beautify India, and the group has nominated such people as “Not-So-Ugly Indians.”

Cleaning up a city the size of Bangalore may seem like a gargantuan task, but the group has already made a difference in some prominent areas of the city. Volunteers cleaned up one major intersection and monitored it for two weeks. “We identified who dumps there everyday,” the group says. “Requested them to stop. Helped them with an alternate system when they could not figure one out on their own. … This is all about changing the Ugly Indian’s behavior.”

If this continues, maybe one day you’ll see a new sign at the airport: “Welcome to Bangalore, the not-so-ugly city.”