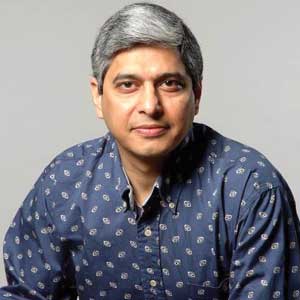 SWARUP BY THE NUMBERS

2 Novels he has published
6 Countries he has worked in as a diplomat
25 Years in the Indian Foreign Service
42 Languages his novel Q & A has been translated into
49 His age
20,000 Words he wrote over one weekend for Q & A

“I’m not one for lengthy descriptions of setting suns or scenery. I like to get on with the story.” (AFP)

“I call myself a diplomat who writes … I think it’s a great time to be an Indian diplomat when the whole world is courting India.” (SPOT Philippines)

Born in Allahabad, Uttar Pradesh, in a family of lawyers, Swarup studied history, psychology and philosophy at Allahabad University, graduating with distinction. He joined the Indian Foreign Service in 1986 and has been posted to Turkey, the United States, Ethiopia, the United Kingdom and South Africa. Since August 2009, he has been the Consul General of India in Osaka-Kobe, Japan.

In 2003, while he was in London, he wrote his first novel, Q&A, in two months. Published in 2005, it was turned into the film Slumdog Millionaire, which won eight Oscars. His second novel, Six Suspects, was published in 2008 and has been optioned for a film by the BBC and Starfield Productions.

Swarup has been honored with the US-India Business Council’s Lifetime Achievement Award for “Contributing to the Cultural Ties that Bind" and a degree of Doctor of Literature & Philosophy from the University of South Africa.

His wife, Aparna, is an artist whose work has been exhibited in India and other countries. They have two sons, Aditya and Varun.

SWARUP ON THE WEB


Swarup talks about his second novel in this video.