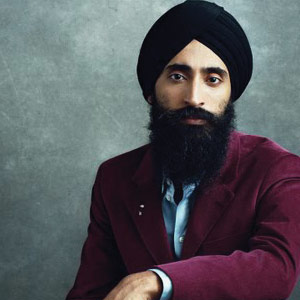 AHLUWALIA BY THE NUMBERS

5 Age when his family came to America

6 Movies he has appeared in

“I am aware of people trying to pigeonhole me and not understanding how the acting goes hand-in-hand with the jewelry design. They might not be comfortable with the idea that I design jewelry and I act. But I don’t feel comfortable with being put in a box.” (The Telegraph)

“Travel is a big part of what I do, but I’m a New Yorker. That’s the only ethnicity I feel most comfortable with.” (FashionEtc.com)

“My motto in life is to learn from experience. I do things and learn from the process and as soon as the process gets boring I am on to the next thing.” (SikhChic.com)

Waris Ahluwalia, whose father was a former linguistics professor and mother a headmistress and teacher, is an actor and jewelry designer who has also become a fashion icon of sorts, appearing on the pages of GQ, Vogue and Vanity Fair.

What’s unusual about his career path is that he never set out to become an actor or jewelry designer. After college, while moving from one job to another, he asked someone in New York’s jewelry district to design a pair of rings for him, each with 40 diamonds. Spending his winters in Los Angeles, he happened to visit Maxﬁeld’s, a lavish boutique, where the owners noticed his rings and wanted to order them. Waris started to supply them and, responding to the great demand, decided to create a jewelry company, House of Waris. The company’s jewelry, now produced in India and Thailand, sell for as much as $7,160 for a turquoise necklace at Barneys New York.

Ahluwalia’s acting career began through his friendship with Hollywood director Wes Anderson, who asked Ahluwalia if he’d like to appear in the movie The Life Aquatic with Steve Zissou, an offbeat 2004 comedy starring Bill Murray. Ahluwalia caught the eye of Spike Lee and was cast in the 2006 movie Inside Man, starring Denzel Washington. “Acting found me just as jewelry did,” Ahluwalia told Vogue Italia.

AHLUWALIA ON HIS TURBAN

Ahluwalia is a role model for many young Sikhs partly because he has achieved success, become a fashion icon, without having to compromise his beliefs. During an interview with Vogue Italia, he was asked about his turban and said, “I’m a Sikh, it’s part of my religious tradition to never cut my hair and keep it wrapped in a turban.” Asked if he ever takes the turban off, he said, “Yes, when I sleep, shower and (have) sex. Not in that particular order. Also swimming. Oddly, all with an ‘S.’”