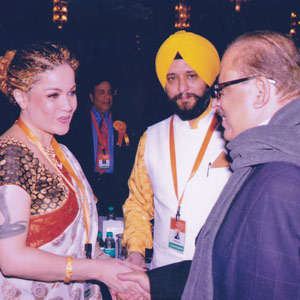 Adrita Khanna, a resident of Atlanta, was recently awarded the coveted Hind Rattan 2014 award by the NRI Welfare Society of India, in a ceremony held on the eve of Republic Day in New Delhi, India. Adrita received the award from Honorable Shri Tariq Anwar – Minister of State for Agriculture and Food Processing of the Government of India and general secretary of the Nationalist Congress Party of India who was the Chief Guest.

Adrita was born in India to a family with a rich heritage of freedom fighting and cultural orientation. She has lived in different regions of India and has studied in India, Switzerland, and the USA. Having worked in the hospitality industry in these countries, she is an expert in customer service.

Her pageant involvement began in 2008 when she won the Mrs. India International title. As Director of the event since 2010, she organizes year-round pageant activities. She promotes family values and showcases the achievements of married Indian women from around the world through her pageants – Mrs. India International and Mrs. Pakistan International, which also help charities for women and less fortunate children. World Vision is one of her favorite charities.

Adrita is also a coordinator of the South Asian Community in the USA, promoting harmony and collaboration amongst people from India, Pakistan, and Bangladesh. A devoted Hindu, she is tolerant, in the true Indian tradition, of all religions around the world.

She has been performing Indian classical dance and folk dances, and has directed and choreographed. She has a passion for acting and has participated in a variety of stage plays, web television, and mainstream cinema in both India and the USA.