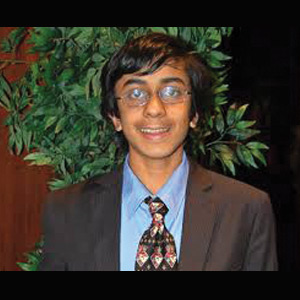 Anand Srinivasan of Roswell, Georgia was one of two Indian-American students who made it to the top ten in the Intel Science Talent Search. In eighth place in these national awards, he received a prize of $20,000 for his project on genomic structure prediction. The project could become a significant factor in helping disease screenings and genome-based pharmaceuticals, for treatment of genetic ailments.

His RNNScan is a neural-network-based computer model which ‘learns’ patterns in DNA in order to predict the boundaries of these genomic regions. Anand’s RNNScan algorithm was able to find nearly twice as many gene boundaries as GENSCAN, a widely used prediction tool.

Another Indian-American student, Shaun Datta from Maryland, took the 10th spot in the awards for his research that used computer models and equations to improve the understanding of the interactions of nuclear matter.

In total, the Intel Foundation awarded $1.25 million for the Intel Science Talent Search 2014. When Intel assumed the title sponsorship 16 years ago, it increased the annual awards by more than $1 million.

This year’s finalists hail from 33 schools in 14 states. Of the 1,794 high school seniors who entered the Intel Science Talent Search 2014, 300 were announced as semifinalists in January. Of those, 40 were chosen as finalists and invited to Washington, D.C., to compete for the top 10 awards. These finalists join the ranks of other notable Science Talent Search alumni, who over the past 73 years, have gone on to win eight Nobel Prizes, two Fields Medals, five National Medals of Science, 11 MacArthur Foundation Fellowships and even an Academy Award for Best Actress.

“We at Intel celebrate the work of these brilliant young scientists as a way to inspire the next generation to follow them with even greater energy and excitement into a life of invention and discovery,” said Wendy Hawkins, executive director of the Intel Foundation. “Imagine the new technologies, solutions and devices they will bring to bear on the challenges we face. The Intel Science Talent Search finalists should inspire all of us with hope for the future.”