Climbing to the highest peaks to help disadvantaged women and children 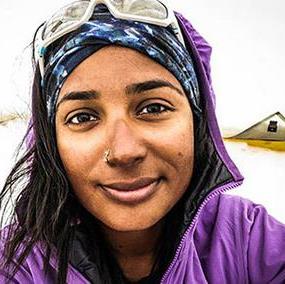 Agnes Scott’s Wasfia Nazreen returned to the college in October to speak about her path since graduation. She is one of National Geographic’s ten “Adventurers of the Year” and is a candidate for the 2015 People’s Choice Award, with voting continuing through January 2015.

Wasfia’s path has led her from Bangladesh to Atlanta, Scotland, India, Tibet, back to Bangladesh, and then to the tops of the highest peaks of the six of the seven continents, including Mount Everest—and the seventh peak is planned this year. Why? For adventure? No, aside from seeing them as sacred and from the personal healing she feels from the mountains, the main point of her journey has been to support work for human rights, especially of women and children.

She learned climbing in Tibet. While a student at Agnes Scott College, she studied in Scotland and traveled to India. In Dharamsala, the “capital” for exiled Tibetans, she met nuns who had been tortured by the Chinese yet could speak of them with compassion, inspiring Wasfia to return after graduation to work with Tibetan refugees. The Dalai Lama heard of her work and asked to meet her. She worked in Tibet on a four-year campaign to protest the 2008 Olympic Games in Beijing, since the Chinese were using them to validate their claim on Tibet.

Then after CARE left a project in Bangladesh that was helping women break away from work in the sex trade, Wasfia found a way to continue to help the women and their children. She sold some family jewelry and took out loans, then found a way to use her passion for climbing to support the work. Her climbs became part of the celebration of the 40th anniversary of Bangladesh’s independence, as they also celebrated the possibility of women’s liberation: as a girl child she had been prevented from playing with a hula hoop or bicycle or sports because of cultural restrictions, but publicity from her climbing and hula-hooping at the top of each summit allowed her to start her project, the Ösel Foundation, for educating marginalized girls, introducing them to the outdoors and sports, and helping them choose a lifestyle beyond traditional, restrictive gender roles. “We are trying to change our society,” says Nazreen. “This seemed like a good place to start,” and “There aren’t many positive stories in Bangladesh. This is one of them.”

Wasfia was also identified by the U.S. embassy in Dhaka and the U.S. State Department’s Bureau of Educational and Cultural Affairs as a candidate for its Global Sports Mentoring Program in cooperaton with the University of Tennessee's Center for Sport, Peace, and Society.

“I have a really deep calling,” she says. “I have some big bank loans. I have no idea how I’m going to pay it off,” but “Growing up, I was marginalized. I don’t want any other girl to go through that.” Climbing to the top of mountains like Everest “made me realize on a deeper level the interconnectedness of every being on the planet and how crucial and urgent it was to leave the world better than we found her.”

4) Vote for Wasfia Nafreen to receive the National Geographic People's Choice Award:
"Allow us to introduce the outstanding individuals who made our year in adventure with their remarkable achievements in exploration, adventure sports, conservation, and humanitarianism. Each embodies a unique spirit of adventure. It's up to you to decide who will be the People's Choice Adventurer of the Year.
"Get to know all ten feats by clicking on the adventurers' names or links to access interviews, photos, and a video. Then cast your vote every day until January 31, 2015, for the person you think most embodies the spirit of adventure. We will announce the People's Choice Adventurer of the Year in February."
http://adventure.nationalgeographic.com/adventure/adventurers-of-the-year/2015/vote/#/happy-summit-everest-bangladesh_85266_600x450.jpg

[The article above appears only on the website for December 2014, not in the print/digital issues.]