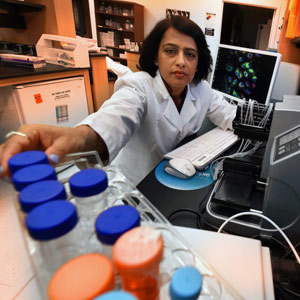 Dr. Shruti Sharma, a researcher at the Center for Biotechnology and Genomic Medicine of Augusta University, has received a $1.5 million grant from the National Eye Institute to study diabetes-related blindness. She is working with a drug being tested for rheumatoid arthritis and repurposing it for diabetes.

Uncontrolled diabetes can damage small blood vessels in the eye, leading to diabetic retinopathy, the leading cause of blindness among working-age adults. Dr. Sharma is using the experimental drug on human cells in the lab and in a mouse model of diabetes. She hopes to prevent the barrier disruption to the retinal cells that can cause them to become leaky and create inflammation. She is looking at an agent in inflammation called interleukin-6 that can affect those cells even though they lack the receptor normally needed for such interaction, an effect called trans-signaling. While that effect had been known for a while, "it is not something that researchers had focused on in the past," she said.

About 9% of Americans have diabetes, and at least 4.2 million have diabetic retinopathy. In the Augusta area, diabetes is even more of a problem, with 13.5% affected in Richmond County and 17% in some surrounding counties—a diabetes belt.

The longer a person has diabetes, the greater the likelihood of eye damage. Because early stages don't have symptoms, most patients don't know there is a problem until vision is affected, and it might be a sudden change. Prevention (keeping one’s diabetes controlled) and screening (having annual eye exams) are therefore vital. And if Dr. Sharma’s research is successful, she may help millions avoid blindness.

An article that weaves in the story of a man needing medical care for his eyes:
Augusta Chronicle:
http://chronicle.augusta.com/news/2016-12-27/augusta-university-researching-new-drug-might-help-diabetes-related-blindness

An article that focuses on the scientists and their research:
Augusta University Medical center:
http://jagwire.augusta.edu/archives/40196