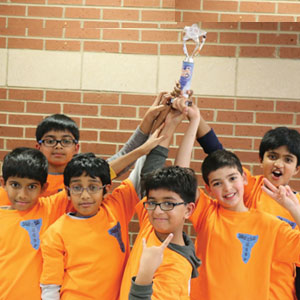 This is the second year in a row for Fulton Sunshine Academy’s team to continue to the world championship. Last year, team Techno Pandas represented Georgia in St. Louis.

This year’s team did extensive research and interviewed 5 different schools and education specialists in different roles, and then decided to tackle bullying, a common challenge in all schools. There were 2 main challenges with bullying: the students were bystanders, and the teachers did not have a way to separate fact from fiction. In addition, the school administration did not have good reporting on type of bullying and the location where bullying was happening. Disaster Blaster team came up with an application on a bullying prevention portal with one module for parents and administrators to capture bullying related incidents and another module to help them get statistics on the type and location of bullying by grades. This reporting can also be used by the parents to get bullying related information on schools across the nation if this is rolled out to all the schools.

“It is indeed a remarkable achievement for a team made up of 5th grade students to compete alongside 8th graders and emerge as champions, and we are honored to represent Fulton County and Georgia at the international level again, 2 years in a row,” said Murat Cetin, Fulton Sunshine Academy’s principal. “Congratulations to these students and their families who helped the Disaster Blaster reach such a goal.”

Fulton Sunshine Academy (http://www.fultonsunshine.org) is a tuition-free charter school in Roswell, Georgia. It will shut down at the end of this school year per Fulton County Schools Board decision.