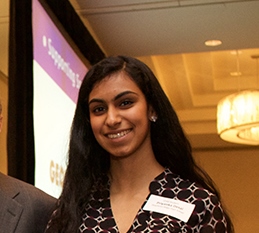 The long competition began when more than 1.5 million students, who at the time were high school juniors, took the 2014 Preliminary SAT/National Merit Scholarship Qualifying Test. The highest scoring participants in each state became semifinalists, and represented less than 1% of the nation’s seniors. Of these, 15,000 advanced as finalists. A committee reviewed each finalist’s academic record including difficulty level of subjects studied and grades earned; scores from two standardized tests; contributions/leadership in school and community activities; an essay written by the student; and a recommendation written by a high school official. Winners numbered 7,500, their scholarships worth about $33 million. In Gwinnett County, the list came down to seven, including
Priyanka Desai of Peachtree Ridge High School (Probable career field: Consulting),
Victoria S. Joshi from North Gwinnett High School (Mechanical Engineering – Robotics),
Anima Shrestha of Parkview High School (Neurosurgery).

NSMC also awarded six College-Sponsored Merit Scholarships. Officials of the 184 sponsor colleges select their winners from among Finalists who will attend their institution. The scholarships provide $500 to $2,000 annually for up to four years of undergraduate study. Winners include
Simran V. Modi of Gwinnett School of Mathematics, Science, and Technology (GSMST) (Medicine) – National Merit University of Georgia Scholarship.

[The article above is a Website Bonus Feature, appearing only on the website for July 2016, not in the July print/digital issues.]