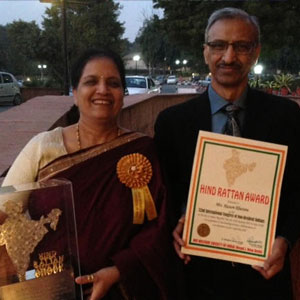 Kusum Khurana, well known in Atlanta’s Indian community, received the Hind Rattan award on the eve on the 64th Republic Day on January 25, 2013. Khurana was one of the 30 recipients selected from over 300 nominations around the world for this year’s Hind Rattan Award. The award is given by the NRI Welfare Society of India for exemplary service and dedication to the Indian community. The award was presented in New Delhi at the 32nd International Congress of NRIs by Tariq Anwar, Minister of State for Agriculture and Food Processing Industries, Markandey Katju, Supreme Court Justice, and Rajiv Shukla, Minister of State for Parliamentary Affairs. In addition to the awards presentation in New Delhi, Khurana was also honored in Jaipur on January 27 by Virendra Beniwal, Home Minister and Minister for Transportation, Rajasthan and Jyoti Khandelwal, Mayor of Jaipur.

Khurana has played an active role in shaping the Indian- American community since her arrival in Chicago in 1971. She is affiliated with various local and national Hindu organizations. An Atlanta native since 1983, Khurana has been actively involved in programs such as Diwali/Hindu Unity Day, an annual event held at Centennial Park, Atlanta; Vanprasth program for seniors; and Balvihar, a Hindi program for children in Cobb County. She also serves as the President of World Hindu Council of America, Atlanta Chapter; Regional Vice President of Ekal Vidyalaya; and the Treasurer of the Hindu Society of Atlanta.