Ramesh Pandya of Lawrenceville, Georgia, recently received two awards in Southern California in recognition of his community service. Following his work on Atlanta’s celebrations of the Golden Jubilee for the state of Gujarat, he was invited as chief guest and speaker at a Kasumbi No Rang event attended by 2,000 people at the Jain Center of Southern California, where he received two Awards—from U.S. Congressman Ed Royce and from City of Buena Park Mayor, James Dow.

He and his wife Hasu Pandya, who also earned a BSAM degree, moved to Atlanta in 1991 and joined the Gujarati Samaj of Atlanta. Pandya has played a pivotal role as Treasurer and running member of Board of Governors since 1996. He has been a driving force in organizing and staging plays in Clayton County and the Gwinnett Center of Performing Arts, as well as in coordinating social and cultural programs, the most notable being the huge two-day Swarnim Gujarat Celebrations for the 50th anniversary of Gujarat State. Another achievement was his involvement in the dedication of the bust of Sardar Vallabhbhai Patel. 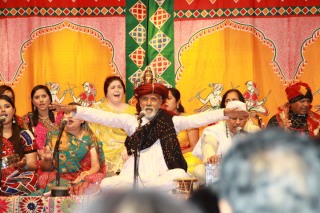 Arvind Joshi, who invited Ramesh Pandya to California, can be seen in the red turban, on stage at the colorful Kasumbi No Rang event in Buena Park, CA.