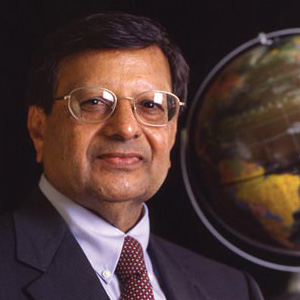 William (Bill) Wilkie, the Nathe Professor of Marketing at the Mendoza College of Business, University of Notre Dame, describes Sheth as “a remarkably talented thinker who is interested in both theory and practice. The sense of the Wilkie Award is that Marketing has huge potential to improve daily lives if done well, and Professor Sheth has been advocating this theme for nearly 50 years, writing over 400 articles and 40 books! He is, as Philip Kotler puts it, ‘a Renaissance Thinker.’”

Dr. Sheth's many impacts include his seminal work on relationship marketing (moving the field toward delivering higher value), his significant support of the academic infrastructure through the Sheth Foundation, and his recent work on the judicious use of resources and “mindful consumption.” He is a highly sought after advisor, having worked in myriad industries all over the world, for improvements in the operations of both firms and governments. His work has been honored at the highest levels, including the top three awards from The American Marketing Association.

Dr. Sheth is a well-respected academic and prolific author. His book The Theory of Buyer Behavior with John Howard proved a key for developing the whole field of consumer behavior. The Rule of Three with Dr. Rajendra Sisodia altered the current notions of competition in business; it has been translated into German, Italian, Polish, Russian, Portuguese, Korean, Japanese and Chinese, and was also the subject of a seven part television series on CNBC (India). Firms of Endearment with Rajendra Sisodia and David Wolfe was selected as one of the top ten business books on leadership. That book and The Self-Destructive Habits of Good Companies…And How to Break Them have been translated into more than ten languages. Recently Dr. Sheth published Chindia Rising: How China and India Will Benefit Your Business and 4 A's of Marketing, co-authored with Rajendra Sisodia.