My Mother – The Proud American Citizen 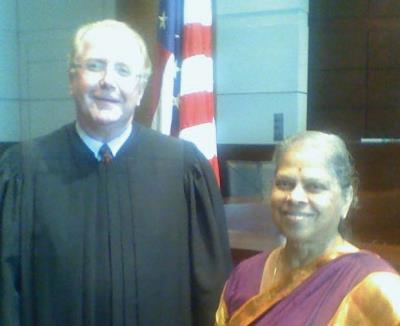 She was enamored from the moment she stepped off the plane in Atlanta. The airport was spotless, the air smelt fresh, the lines were orderly, and the people were courteous and friendly. She said she felt as if she had stepped into a time warp – and suddenly transported into the future. She took a deep breath of pure delight.

My mother’s excitement grew as we drove to our home in an Atlanta suburb. She loved the highway, with the cars whizzing past at 60 m.p.h., the tree-lined streets, the brick houses neatly arranged in a row. It was a far cry from the heat, dust, bustle and chaos of New Delhi.

I took her around the city over the next few weeks. She rubbed her hands in glee when she stepped into a grocery store for the first time, with the neat aisles and easily-reachable items. She just couldn’t get over the incredible variety of products offered. She insisted on buying at least a dozen cereals. At that time, cornflakes was the only readily available cereal in India.

She marveled at the mall—the first one she had seen. She would dart from store to store, looking and touching different items. She got into a little trouble when she walked out of a shop with a lipstick in her hand. It took me a while to convince store security that she was not shoplifting, that she merely thought the whole mall was one giant shop.

She was absolutely enchanted with Disneyworld. Our first stop was “Space Mountain,” and it was my mother’s first time on a roller coaster. It’s an experience that will stay with me forever. When the ride began picking up momentum,  while others screamed, she started to pray loudly. “Hare Rama, Hare Krishna”, she chanted, and then recited all the Sanskrit shlokas she knew. She was convinced she was going to die. In between the chants I heard her mumble that she wanted to live to see her two other children married! When the ride was finally over, she was shaken for a few minutes, but she soon bounced back to her usual high-spirited self, and wanted to go back again!

The year was 1985, just a short while after I immigrated to the United States. My mother came back to visit us several times, sometimes alone, and at times with my father.

My mother very quickly adapted to the American way of life. She caught up with culture by watching a lot of television, both news and entertainment. She became hooked on soap operas and would describe plots in intimate detail when I came home. She made friends with all our neighbors. In St. Louis, where my brother lives, my mother’s best friend was an immigrant from the African country of Manali. They would take walks together, and talk about the sensational news items on television. My mother would even cook Indian food for her friend. In my sister’s house in Columbus, Ohio, she would talk to the neighbors and invite all them over. In fact, she would just about invite everybody home, from a neighbor to the person sitting beside her on the plane.

My mother’s love affair with America has been growing for the past two decades. Her attachment was more than just the physical comforts, the conveniences, and the ease of day-to-day living that she said she couldn’t find anywhere else in the world. For her it was much more: a metaphysical relationship that as a journalist, I find hard to put into words. She said she could taste the freedom here.

My father passed away a few years ago. Since the three of us were all citizens, we suggested my mother become one too. She jumped at the idea. When it came through, she immediately started to study for her citizenship test with the enthusiasm of a teenager. She pored over the questions about the Bill of Rights, the Supreme Court, the number of Senators. She worried that the interviewer would not understand her accent. She didn’t sleep the night before her citizenship interview, convinced she would blow a question or two.

Saroja Seetharaman finally became an American citizen just months ago. My mother’s beaming smile says it all. No one could be prouder!

[Chandrika Narayan is a journalist with CNN and lives in Atlanta with her family. She says she is still amazed by her mother’s energy, enthusiasm and joie de vivre]