Touchdowns in the Land of Sixers 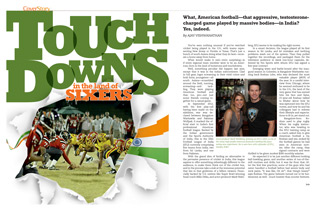 You’ve seen nothing unusual if you’ve watched cricket being played in the U.S., with teams representing New Jersey or Florida or Texas. That’s just a bunch of south Asians doing what they do best—recreate a home away from home.

What would make it rare—even surprising—is if every regional team member were to be an American, born in the land of home runs and touchdowns.

Well, something peculiar did happen last year, except that it was in the Indian subcontinent. Clad in full gear, logos screaming in their vivid colors and bold fonts, youngsters—all south Asians—scrambled around the field, running, screaming—and tackling. They were playing American football and that, too, pro—not just some friends coming together for a casual game.

In September 2012, with the first play-call having been made on the sidelines, war was declared between Bangalore Warhawks and Pakistan Wolfpak. It marked the official start to India’s first professional American football league. Backed by the Indian government and the Sports Authority of India, this is the Elite Football League of India (EFLI) currently comprising five teams from India, two from Sri Lanka, and one from Pakistan. 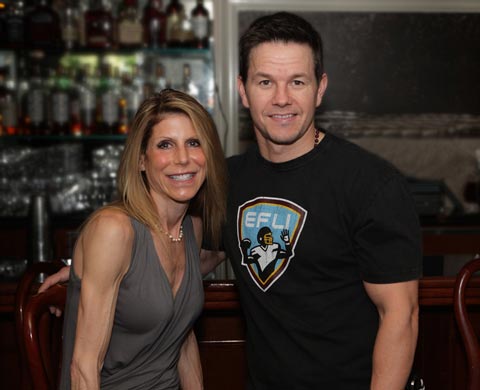 Actor-producer Mark Wahlberg, donning an EFLI t-shirt, is one of the many high-profile American financiers backing this fascinating new experiment. He is seen here with cofounder of EFLI, Sunday Zeller.

With the grand idea of finding an alternative to the pervasive presence of cricket in India, this league aspires to offer something refreshingly different to the audience, to make them think out of the cricket box, and in the process take a stab at the immense potential that lies in that goldmine of a billion viewers. Financially backed by U.S. natives like Super Bowl-winning head coach Mike Ditka, and actor-producer Mark Wahlberg, EFLI seems to be making the right moves.

In a smart decision, the league played all its first season in Sri Lanka, and let mistakes and teething problems wash out of the system. Then they pulled together the recordings, and packaged them for the television audience in sleek one-hour capsules, delivered by Ten Sports with whom EFLI has signed a five-year contract. 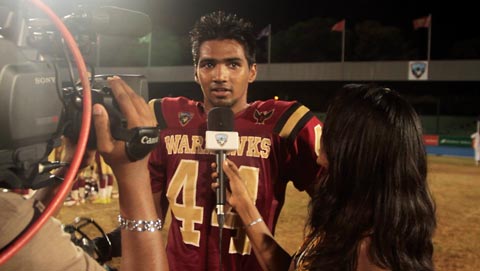 In an interview with Khabar, Bangalore Warhawks running back Roshan Lobo, the most valuable player (MVP) of the 2012 season, talked about the formidable challenges that Indian players face.

Emerging wiser and battle-honed after the inaugural season in Colombo, is Bangalore Warhawks running back Roshan Lobo, who was declared the most valuable player (MVP) of the year. In a candid interview from Chicago, where he seemed enthused to be in the U.S., the land of the very game that has earned him his face and fame, 21-year-old Roshan talked to Khabar about how he was siphoned into the EFLI vortex, and how he and his colleagues had to redress their lifestyle and expectations to fit in, yet stand out.

Bangalore-born Roshan used to play rugby. When his rugby instructor, who was heading to the EFLI training camp as a coach, asked him to give American football a try, Roshan said yes, stoked by the football games he had seen in American movies. After the camp, they signed contracts and were thrilled to be given modest $300 monthly salaries.

He expected it to be just another different-looking ball-hawking game, and another series of run-of-themill routines and drills, but it was far from that. After the first few practices, some of the guys who had never handled a football before had severe body and neck pains. “It was like, Oh sh**, that thing’s heavy!” says Roshan. The game helmets turned out to be burdensome as well—much heavier than scooter helmets. All of them realized that what they had signed up for was not some quick, lucrative, and effortless alternative to what they’ve played before, but a demanding collision sport with complex play-calling and a bruising aftermath. It’s a race track, except that big-bodied men are running at each other. 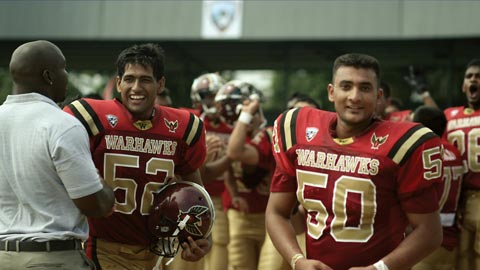 It turned out every position in the game had a different training regimen and nutritional intake. Initially slotted as a defensive player, Roshan was thrust into the running back role by necessity. In a hard-nosed, pummeling position in football with the shortest shelf life, Roshan had to train hard under American coaches and by watching YouTube videos. He focused now on how to stay low, sidestep in traffic, and guard the ball to avoid fumbling it while being pummeled by the defender. To resist injuries, Roshan is still looking to increase strength training and to gain weight. “It’s scary,” he says “to see how these running backs get hurt.”

Those who have been following cricket for years know that as athletes we are self-preserving, less prone to acrobatic dives and risky slides. So, how does one conform to a contact sport like football where battering and plowing into players are inextricably tied to its success? “You have to learn to absorb big hits,” says Roshan. Apparently, there are enough players waiting in the wings for coaches to tell the lily-livered to get tough or get kicked out. It has taken time for that culture to set in, the culture of soaking up launching hits. “Initially, there were a few wide-receivers who caught the ball and stood there like their minds had frozen,” says Roshan. “They were not used to defenders ramming into them.”

The Mumbai Gladiators (red shirts) versus the Colombo Lions. For those mildly interested in sports in India, these may sound like IPL teams, but rest assured they are playing a different ball game!

A game like this has never been played at this level in India, so along with the distinctness came the inescapable concerns of concussion that the National Football League (NFL) has been grappling with in the U.S. “We don’t know much about it right now,” says Roshan. “When you’re running at that pace, you don’t think of injuries.” But he’s confident that EFLI is working with veterans in the area to tackle the issue and make sure that the best equipment is available to the players. Recently, Sunday Zeller, EFLI Co-CEO, announced a partnership with TMS Sports to provide all players with the latest technology incorporating a cooling system in shoulder pads, something currently used by seasoned NFL teams like the Dallas Cowboys and Indianapolis Colts. This tries to address the great burden of heat and humidity that could cause dehydration and fatigue, especially in India’s tropical climes.

And the best equipment and technology don’t come cheap. Which begs the question: how does the common man get his hands on it? Like soccer, the advantage of cricket lies in its minimal requirements—if you have a wooden stick, a rubber ball, and three stones, you can start playing a match.

But if you first need complicated protective gear to play a real game of American football, then its appeal might be confined to the privileged. EFLI plans to first introduce this game in schools and universities that might be in a better position to invest in proper equipment. The idea is that once the game’s popularity mushrooms and rules get clearer, the man in the villages and city gullies could play touch or flag football, which is essentially the same game without the jaw-dropping collisions.

There are other problems that EFLI will face: parental anxiety in sending children to play a contact sport like American football where the turn to violence is just around the corner; access to more grounds and training facilities; the lingering question of whether there is enough money in this sport—for players, for TV channels, and for team owners? 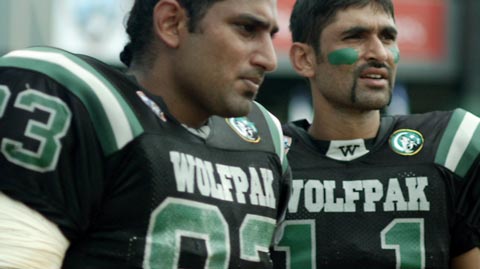 Will this spark a new era of the spirited Indo-Pak sports rivalry? The Pakistan Wolfpak is one of the eight EFLI teams so far.

The conversation with Roshan turned amusing when we talked about rules and play-calling. “It was pretty much like school,” he says, “writing down the plays, going home and learning them.” Mastering the playbook wasn’t an easy task for most players; the countless codes and little tweaks in plays confused them, and then there was the language problem. “There was a play called Oklahoma,” says Roshan, “that some players had problems even pronouncing.” To make life easier, the coaches later changed it to Silk. “One of our players was called Silk. So it worked,” says Roshan with a chuckle. Coaches tried to adapt in other areas as well; to solve the problem of remembering tougher Indian names, they called them by names of players from the NFL. One quarterback from Delhi was called Tom Brady. Manjunatha, the Bangalore linebacker was called Ray Lewis.

After days of translations and going through the grind of repeated plays, the players got more comfortable, some better than the others.

With the first season wrapped up, EFLI and its players are hoping to see the flame grow into a fire in the years to come. “I think Indians like contact sports,” says Roshan. “Look at the impressive viewership ratings of World Wrestling Federation.” Along with hope, there are plans to add more merchandise stores, slot players into categories depending on their skill and pay them accordingly, televise the games live to a curious audience, and burgeon into a league of 52 teams by 2022.

If the ambitious plans of the EFLI indeed take root and flourish, then pretty soon, along with pulls, doosras, slips, and glances, Indian sports enthusiasts will be talking about interceptions, fumbles, touchdowns, and even Silk.

Coming up next month: An interview with Richard Whelan, the CEO of EFLI, as he talks about their visionary plans and the massive logistics of planting a new game in a country, one that has, in his opinion, the potential to compete with the Indian Premier League.

Will the celebrations continue into upcoming years? 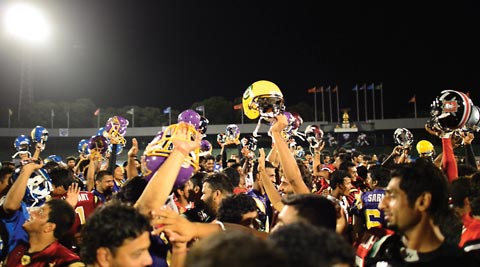