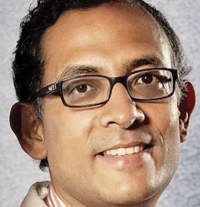 Indian-born Abhijit Banerjee and French-born Esther Duflo, co-authors of an influential book called Poor Economics, are a married couple who teach at MIT. Along with Michael Kremer, who teaches at Harvard, they were awarded the 2019 Nobel Prize in economics for designing a robust poverty reduction method that incorporates meticulous experiments and specific policy questions. The trio will share over $900,000.

Aman Bhutani is another Indian-American executive who has climbed the corporate ranks in the U.S. to become a CEO. After a nine-year stint at Expedia, Bhutani takes over at GoDaddy Inc., the web-hosting company and domain registrar based in Arizona. As of last year, with more than 62 million registered users in various countries, GoDaddy was the world’s biggest web host by market share.

Sujatha Baliga, an attorney and director of the Restorative Justice Project at Impact Justice, has been picked as a MacArthur Fellow. Baliga, who experienced sexual abuse as a child, has worked to reduce youth incarceration and assist victims of crimes. A practicing Buddhist who believes in forgiveness, she’s dedicated to helping survivors and perpetrators. Baliga is the only Indian-American winner of this “genius” grant in 2019.

Agha Shahid Ali, the distinguished Kashmiri American poet, would have been 70 this year. He was just 52 when he died in 2001, the year he became a National Book Award finalist. He belonged to a notable Kashmiri family, and the attachment to his roots was vivid in his work, as in the poem “Postcard from Kashmir,” where he wrote about “the half-inch Himalayas in my hand.” A poetry prize is awarded in his memory.

Sandeep Dhaliwal, described as “humble” and “fearless” by U.S. Army Captain Simratpal Singh, was Harris County’s first Sikh sheriff’s deputy. Covering the Houston area, it’s the most populous county in Texas. The captain spoke at the funeral service for Dhaliwal, who was shot from behind when he pulled the suspect over for a traffic violation. Thousands of people came to pay tribute, and there was a 21-gun salute for Dhaliwal.

Arjun Bansal, along with Singapore-based Ankiti Bose (Khabar, October 2019), is included in Fortune magazine’s “40 Under 40” list. This annual list features “disruptors, innovators, rebels, and artists.” Bansal co-founded Nervana, a silicon chip producer that was acquired by Intel in 2016. Bansal and his team in the U.S. and abroad are at the forefront of chip development. He’s the VP of AI software and the AI lab at Intel.

Upasna Sharma, a molecular biologist at the University of California, is among the four Indian-American recipients of the National Institutes of Health’s New Innovator Awards. The others are Dr. Rajan Gupta, a cardiologist at Brigham and Women’s Hospital in Boston, Dr. Mandar Deepak Muzumdar of Yale Cancer Biology Institute, and Vasanth Vedantham, associate professor of medicine at the University of California.

Zubin Mehta has finally retired. No other music director of a major symphony orchestra has had a longer stint than Mehta, who was born in Bombay. Five decades after making his debut with the Israel Philharmonic Orchestra, Mehta stepped down this year. Mehli Mehta, his father, founded the Bombay Symphony Orchestra. Zubin Mehta, 83, also had conducting stints at the New York Philharmonic and other orchestras. 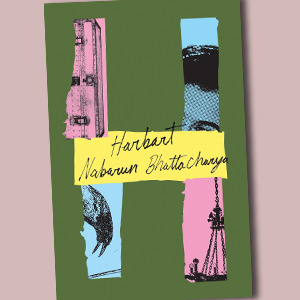 Harbart (New Directions Publishing) – by Nabarun Bhattacharya. Translated by Sunandini Banerjee. For a long time, good English translations of contemporary Indian literature were not easily available here. So it’s a cause for celebration that publishers like Grove Press (Murugan’s One Part Woman) and Penguin (Shanbhag’s Ghachar Ghochar) are making them accessible to American readers. As for New Directions, it does more than most publishers to bring out English translations of foreign works. Bhattacharya, who died in 2014, was a revolutionary with a devoted following for his edgy fiction, though he wasn’t widely known. He was the son of playwright Mahashweta Devi and actor Bijon Bhattacharya. In this novel, which won the Sahitya Akademi Award, the hapless Harbart Sarkar, a poor orphan, is shunned by all his relatives—only his aunt is nice to him—and he leads a hard life. But then his luck changes. Harbart realizes that he can communicate with dead people! In his introduction, Siddharta Deb calls the novel “zany, terrifying, and liberating in equal measure.” 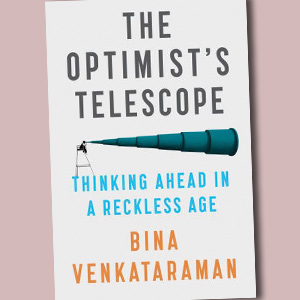 The Optimist’s Telescope: Thinking Ahead in a Reckless Age (Riverhead) – by Bina Venkataraman. Why are we so poor at dealing with risks facing us, and what can we do about it? Think “climate change,” about which Venkataraman, a former science journalist and adviser to the Obama administration, knows a lot. But it also applies to other issues (politics, relationships, health). In fact, the book was in part inspired by a painful experience with Lyme disease, which she’d initially ignored because of her busy life. Venkataraman, who grew up in Ohio, teaches in the program on science, technology, and society at MIT. She traveled widely for interviews, and also drew on research in behavioral biology, economics, and psychology. While we know about the “ostrich paradox” and realize that thinking fast instead of slow is problematic, it’s still possible to avoid myopia. “Humanity is more than biological programming: We can change our behavior through conscious decisions—from what we can do in line at the grocery store to how to make laws,” she notes. 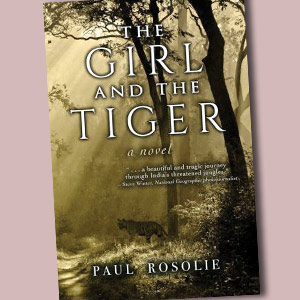 The Girl and the Tiger (Owl Hollow Press) – by Paul Rosolie. Meet Isha, a 15-year-old girl who feels like a misfit among humans but is very much at home in the nonhuman world. It reminds one of The Jungle Book. Rosolie, an award-winning naturalist and filmmaker, is married to a Kannada woman, and the novel is set in India. As a conservationist, he has worked to protect thousands of acres of animal habitat in India and South America. His Mother of God is a nonfiction account of his trip to the tributaries of western Amazon. In this novel, when Isha is banished to live with her grandmother near the jungle, she makes her way to a grove, where a tiger cub is hiding. Will it see Isha as a savior? For his book, Rosolie drew on his experiences in India with his wife. “More than once we fell asleep to the sound of tigers roaring in the distance, and together we saw our first tiger up close,” he writes. 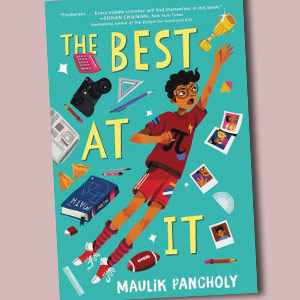 The Best at It (HarperCollins) – by Maulik Pancholy. Known for his acting roles in TV shows like 30 Rock and Whitney, Pancholy has now shown a talent for writing fiction. This middle grade novel, in the style of the Big Nate series, takes us to the human jungle known as middle school. There are bullies and best friends, nice kids and naughty kids, and the drama—like a soap opera—can be all-consuming. Besides the fun, there is much learning going on, especially about differences and tolerance. Rahul is not only a racial minority, but his sexual orientation puts him at odds with the majority. His friend, Chelsea, is there to help, just as Brent is there to hinder. Then there is grandpa Bhai, who tells Rahul to find one special thing—and become “best at it.” The novel has received starred reviews from Kirkus, Booklist, and Publishers Weekly. It is set in a small town in the Midwest, a world that’s obviously very familiar to Pancholy. He leads an anti-bullying campaign (#ActToChange) that he co-founded.