COVID-19  In-depth info for Indians in Atlanta/Georgia. Click here
Home > Magazine > Desi World > A Dance Wonder in Down Under

A Dance Wonder in Down Under 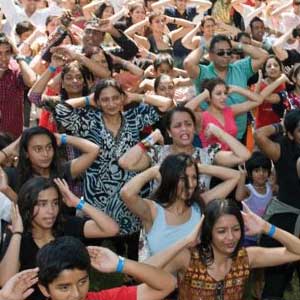 Australia may be a distant continent, but Aussies—with their laid-back ways and a British inheritance that includes cricket and the English language—seem familiar to us. In recent years, however, the sunny image of Down Under has turned dark in the eyes of Indians. A rash of violent, often racist, attacks on students from the subcontinent has diminished the appeal of Australia, especially Melbourne, where many of these incidents took place. Some dubious institutions were shut down, and the number of Indian students going to Australia has dropped.

Hence, it’s all the more interesting to note that a Bollywood-inspired dance-a-thon in Melbourne has won a spot in the latest Guinness Book of World Records. For the previous world record, over 1,008 people had sung and swung in Singapore to a Hindi film number. This year in Melbourne Park, over 1,200 participants danced for three minutes to the song “Munni Badnaam Hui” (from the film Dabangg). The performance, led by Malaika Arora Khan, included actor-producer Arbaaz Khan, who is her husband, and actress Vidya Balan. It was organized by Mitu Bhowmick Lange, director of that region’s Indian Film Festival, ‘Bollywood and Beyond,’ which was held in Sydney, Melbourne, Adelaide and Auckland this year. Hindi movies were screened, along with a handful of regional ones, and there was also a competition for makers of short films.

There are other bright spots, despite the recent attacks on Indians. Following the success of Salaam Namaste—reportedly the first Indian film shot fully in Down Under—Bollywood’s ties to that country have become stronger. Other Hindi movies set there include Dil Chahta Hai, Chak De! India, Singh Is Kinng and Heyy Baby. Taking note, the Australian government is dangling incentives to entice more Indian filmmakers.

So, will the trickle turn into a torrent? Keep watching.