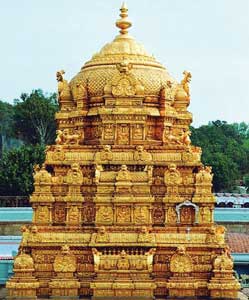 It’s thought to be the world’s richest—and most visited—Hindu temple. The Tirupati temple, which attracts well over 60,000 devotees every day, would have looked even richer if a gold-plating project had been approved. That proposal, however, has been mired in controversy since the time it was floated in 2005. Over 440 pounds of gold would be needed to gold-plate the walls of the temple’s sanctum sanctorum, which occupies 10,000 square feet.

Objections were raised because the walls have close to 650 ancient inscriptions, some of them dating back to the 10th century. Following a public interest petition, the Andhra Pradesh High Court put the project on hold. And the Archeological Survey of India, after studying the matter, has concluded that any gold-plating attempts would cause irreparable damage to the inscriptions.

Now here’s a dilemma: what happens to the generous donations for the project that have already poured in, both from ordinary pilgrims and bigwigs like the Ambani brothers?