A Guide to Modern Indian Lingo 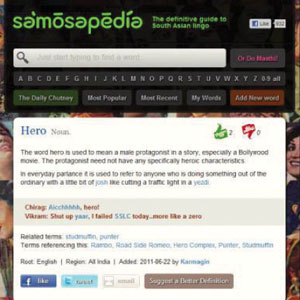 Samosapedia’s most popular entry—‘traditional with modern outlook’—comes across as a variation of ‘best of East and West,’ which one sees in matrimonial ads in this country. “Usually refers to a woman representing the ideal catch for the Indian male,” begins the deﬁnition, which got well over 300 thumbs up (rather ‘thums up’) in the manner of Urban Dictionary. Next comes ‘bucket bath,’ which is pretty common in India. But you would also ﬁnd a bucket handy for a ‘head-bath’ (washing your hair with shampoo) if your shower stopped working, or if there was ‘load shedding’ (a power cut) in your neighborhood.

Think of Samosapedia as an online dictionary for users of Indian-inﬂuenced English.

Earlier, we had Hobson-Jobson and Hanklyn-Janklyn. But while those dictionaries had an Anglo-Indian pedigree and belonged to the more decorous print era, Samosapedia is better suited for the unruly digital era. It’s a collaborative work-in-progress along the lines of Wikipedia. Samosapedia reveals how the inﬂuence of Indian languages has led to a richly idiomatic—not to mention idiosyncratic—use of English in the subcontinent.

What if you wanted to become a contributor? You can ‘kindly do the needful’ by registering as an ‘enthu cutlet’—which means being overly enthusiastic. After registering online, you can create new words or expressions, which are then ‘liked’ or ‘disliked’ by other users.