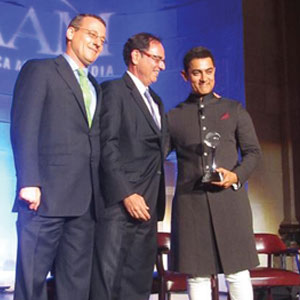 Translation: Truth Alone Prevails. This popular TV talk show, created and hosted by film star Aamir Khan, was a hit in India for the pioneering way it highlighted social problems. It drew notice in the U.S., too, and the International Center for Nonviolent Conflict (ICNC) recently honored Khan with the America Abroad Media Award. Kathryn Bigelow, the Oscar-winning film director of gritty dramas that provoke thought on combat violence, was the other recipient of this inaugural award.

Fourteen episodes of Satyamev Jayate were aired last year, and the second season begins this month. “Is Love a Crime?” asked one episode, taking on the barriers of tradition that come between people of different communities, preventing relationships and marriage. Other episodes focused on child abuse, female feticide, water shortage, alcoholism, and medical malpractice, to give some examples. The first show to be telecast simultaneously on a private channel and India’s government channel, it’s been dubbed from Hindi into several Indian languages. ICNC promotes nonviolent conflict as a way for disadvantaged people to fight for their rights, challenge an inequitable system, and find justice.

Civil disobedience, in other words, becomes the means to achieve civil rights.