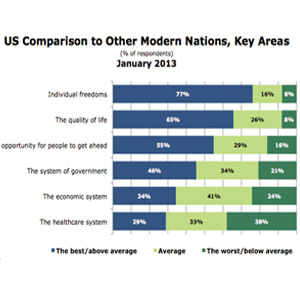 In February, a Gallup World Affairs survey of 22 nations provided a glimpse of how Americans view others. India scored a respectable 68 percent, with only five other countries in the group getting a more favorable rating from Americans. India’s unfavorability rating was 23 percent. Along with India, France and Israel were considered ‘above water’—meaning, “although they are not at the top of the list, they engender attitudes from Americans that are much more favorable than unfavorable.”

Canada, Great Britain, Germany, and Japan scored the highest favorability ratings, with more than 80 percent of Americans viewing these nations positively. The criteria for judging other nations were as follows: Did they pose a threat to the U.S.? Were they democracies and allies? Was there instability in that country?

But how did Indians view America? In a Pew Research Center survey last year, 41 percent viewed the U.S. favorably and 42 percent had a positive view of Americans. If that’s surprisingly low, the response to the following question holds a clue: “Does the U.S. consider your country’s interest?” Only 44 percent of Indians said yes. Nevertheless, 55 percent favored U.S.-led antiterrorism efforts and 49 percent admired American technological and scientific advances. Only 41 percent expressed confidence in the U.S. President. Also, unexpectedly, not more than 33 percent liked American ideas about democracy and American ways of doing business. And contrary to what one thinks of globalization, only 26 percent thought the spread of American ideas and customs to their country was good. American popular culture, in particular, seemed unpopular, with only 19 percent of Indians liking American music, movies, and television. In contrast, 79 percent of Spaniards enjoyed American popular culture.