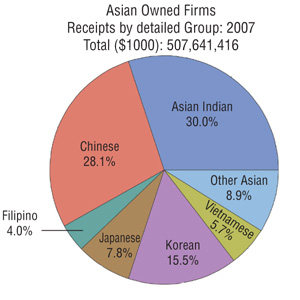 Furthermore, 48.9 percent of Indian-owned businesses were in the professional, scientific and technical services sector; the retail trade sector; and the healthcare and social assistance sector. It was 40 percent for Chinese-Americans. Overall, Indian-Americans owned 1.7 percent of all U.S. businesses in these sectors.

As the report points out, New York-Northern New Jersey-Long Island (64,457), Los Angeles-Long Beach-Santa Ana (23,151), and Chicago-Naperville-Joliet (17,362) were the metro statistical areas with the highest number of Indian-owned businesses.

How did Georgia fare?

It was one of the top 10 states for Indian-American business owners. The other states (apart from the ones already mentioned) were New Jersey, Illinois, Florida, Virginia, Pennsylvania and Maryland. While the Vietnamese in Georgia owned the most number of businesses among Asian Americans, Indian, Chinese and Korean-owned businesses generated the the highest revenue.