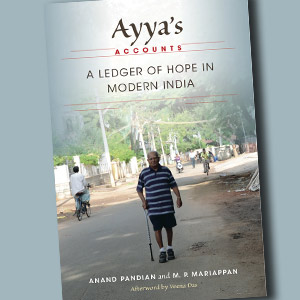 For Ayya’s Accounts (IU Press), anthropologist Anand Pandian collaborated with his grandfather, M.P. Mariappan, a merchant who lived in colonial Burma for a while, and has long since settled in Madurai, India. Pandian grew up in the U.S. This narrative of Ayya’s long and eventful life, told in his words, was written by his Johns Hopkins-based grandson, who did the translation from Tamil to English and then stitched it all together by including his own thoughts and observations in alternating chapters. He calls the book “a ledger of hope in modern India.”

The resulting work, accessible rather than academic, is only deceptively simple—because, in sketching an ordinary man’s passage over a lifetime, from tradition to modernity, it also charts a country’s century-long journey. This is where the anthropologist’s skill comes in handy. Pandian, who spent a lot of time in India, has been able to absorb Ayya’s experiences and make them seem universal. In turbulent Burma, Ayya went from being a guest to an alien. And in India, he endured poverty and humiliating caste discrimination— although eventually, as the nation progressed and Ayya’s hard work paid off, that gave way to achievement and dignity. Later, he reveled in the success of his children and grandchildren, even visiting them in the U.S.

“Most of us have had grandparents or other elders murmuring from the corners of our lives, sharing tales that are sometimes riveting, sometimes simply tedious,” Pandian writes. “The lessons of their experience may go heeded or unheeded by those who follow them. But with Ayya, I found that I couldn’t shake the sense of a deep and insistent debt.”