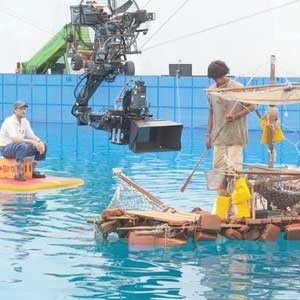 While Indian moviemakers routinely flock abroad, in 2011-12 only about 20 permits were granted to foreign producers who wanted to film in India.

Then along came Ang Lee’s Life of Pi, winning 11 Oscar nominations and catapulting Yann Martel’s Booker Prize-winning novel (on which the film is based) to the bestseller list again. Now the Indian government, which has honored Life of Pi with two national tourism awards, wants to capitalize on the film and attract more foreign producers—and foreign travelers.

The tourism department has picked Pondicherry (now Puducherry) and Munnar, two of the location sites for Ang Lee’s film, for walking tours. Buses will ply between the two cities—and, among other plans, there will be a chance to take photos next to a boat filled with animals. Stuffed, that is, not real or digitized. The timing is good for Pondicherry, a former French colony that became a union territory 50 years ago. Five years later, in 1968, Mirra Alfassa, the spiritual collaborator of Aurobindo Ghosh, founded Auroville (or City of Dawn), which continues to thrive as an experimental and universal community.

As for Munnar, it’s one of the most picturesque hill stations in southern India. But you won’t see carpets of the famous kurinji flowers anytime soon. They bloom only every 12 years, and the last flowering in the Nilgiris, Palani Hills, and Munnar was in 2006.