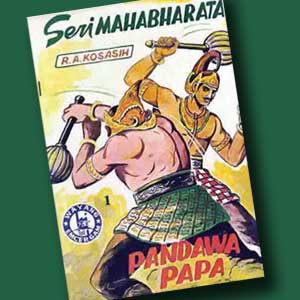 If you grew up in India, your early exposure to the Mahabharata and the Ramayana probably came through a diet of ACK comic books. That’s short for Amar Chitra Katha.

What if you grew up in Indonesia?

It turns out Indonesia also has a vibrant comic book industry that draws on Indian myths and legends, as interpreted by the local tradition of wayang (shadow puppet shows). These comic strips, ﬁrst published in the 1950s, were known as komik wayang. In recent years, Indonesian publishers like Melody and Pluz+ have brought them back to life in book form. R. A. Kosasih is renowned even today for his comic strips based on the Javenese versions of Indian classics. The epics, with their multiple stories, are so immense that the sub-plots have spawned 147 wayang shows, which can take up 147 days of nine-hour performances.

Garudayana, a contemporary comic book published by Koloni, can be seen as a cross between magna and wayang. The Mahabharata-based characters may be ancient, but the style of storytelling is new and novel. Another well-known pioneer of Indonesia’s comic book world is Jan Mintaraga, who turned to the Ramayana for his illustrated tales of valor, villainy, and virtue. His work has entertained generations of readers. And it inspired one fan to build a Web site where up-and-coming artists can showcase their creations. So, even in the digital era, the wayang comic strip tradition lives on.

Speaking of the Mahabharata, there are others reminders of this epic in present-day Indonesia. One prominent example is the Arjuna Wijaya chariot monument in central Jakarta.