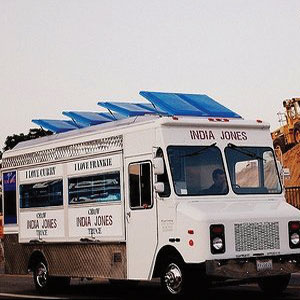 He came from India...she’s from Indiana. But since ‘Indiana Jones’ is taken, the couple tweaked this household name to ‘India Jones.’ And since they are in the business of selling Indian street food, their restaurant-on-wheels is called India Jones Chow Truck.

In India, eating on streets is more common than eating in restaurants—but in the U.S., Indian street food is practically unheard of, except in some big cities like New York. One pioneer in this business is India Jones Chow Truck, which operates in the Los Angeles area and a few beach towns along the Paciﬁc Coast. Chef Sumant’s $5 frankie, non-veg or veg and slathered with cilantro tamarind chutney, is a hot seller. It won’t be long, one hopes, before similar trucks selling Indian street food roll into cities like Atlanta.

Meanwhile, Atlantans can check out the Good Food Truck, whose cuisine has the inﬂuence of “local Southern comfort food as well as Asian, Mexican, and Indian ﬂavors.” Creative Loaﬁng picked it as the ‘Best Food Truck’ in 2011.