Making a Difference in Rural Bihar 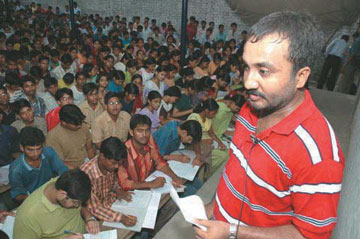 There is a class of Indians (say, C) that’s always complaining about how unfortunate many things are in India. Fortunately, there is another class that we could call D. These are doers, not complainers, and they often make a vigorous effort—even when there is little personal benefit—to bring about positive change in India.

In Bihar, which gets a bad rap, Anand Kumar of Super 30 clearly belongs to Class D. As Khabar noted in an earlier article, he runs a free coaching institute for talented rural students who are, economically and socially, at the bottom. Did you know that in 2010 (as in the previous two years) all the students in his Super 30 class passed the rigorous IIT-JEE entrance exam? A few other coaching institutes have said that Kumar doesn’t release his Super 30 list before the exam results are announced. But Kumar, who has been widely admired, dismisses the criticism, attributing it to rivalry.

When Kumar recently met with Kapil Sibal, Union Minister for Human Resource Development, he gave him suggestions for preventing errors in the IIT-JEE question papers. He also said that disadvantaged students should get three rather than two chances to ace the exam.

Another worthy initiative in Bihar is the Husk Power Systems (HPS), launched by Gyanesh Pandey and associates Manoj Sinha, Ratnesh Yadav and Charles W. Ransler. All except Ransler, who is not Indian, are natives of Bihar. Pandey and Sinha did their higher studies and worked in the U.S., but they couldn’t resist the idea of starting a project in their home state. So what is HPS? It’s a biomass gasification outfit that uses discarded rice husks to generate power. The burning of rice husks in a furnace at high temperatures produces combustible gases, which then create electricity via an alternator.

Almost 4.5 pounds of rice husks are needed to generate 1 kilowatt of electricity. In its three years, HPS has turned out to be a success and now there are plans for expansion well beyond Bihar. So far, 40 rice husk plants are fully operational, according to Pandey, with each one producing roughly 32 kilowatts of electricity for homes in the villages of Bihar. As HPS gains praise, attracting more investment in its efforts to electrify energy-strapped India, Pandey & Co. can take pride in the fact that they’re making a difference where it’s needed most. When Acumen Fund recently invested $375,000, the total amount raised by HPS reached $3 million. And the firm is making a healthy profit.

By choosing to focus on a region that’s off the grid, these plucky entrepreneurs in Bihar are very much on the grid in terms of their priorities.