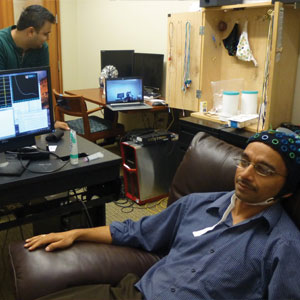 Has telepathy moved from the realm of science fiction to the real world?

Seems like it, though in a modest way, judging by an experiment done by computer scientists Rajesh Rao and Andrea Stocco at the University of Washington in Seattle. The brain-to-brain communication occurred when Rao was able to send information to Stocco via TMS. No, that has nothing to do with transcendental meditation. It stands for a non-invasive technique called Transcranial Magnetic Stimulation, which is used to control the activity of a particular spot on the brain’s surface.

While it was Rao who wanted to fire a cannon on the computer screen and hit a target, it was Stocco, sitting at a different location, who managed to pull the trigger (i.e., hit the space bar) at the exact moment when Rao had the thought—a fact that was captured with the help of another known technology: EEG (electroencephalography). Although the one-way telepathy is still at a primitive stage, these two researchers are already working on a new experiment where the communication occurs both ways. Rao is Indian, and Stocco Italian.

There’s another mystery—one belonging to the distant past—that Rao wants to unravel using technology. It’s the 4000-year-old Indus script, which remains impenetrable even after many attempts over time. In a 2011 TED talk, he pointed out that modern computational techniques may finally give him the chance to solve what he calls the “mother of all crossword puzzles.”