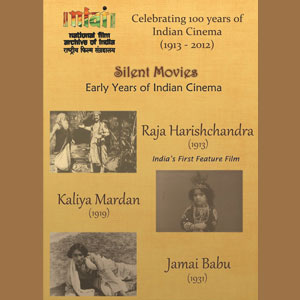 Speaking of films, India’s first motion picture, Raja Harishchandra, and five others from that silent era are now available on DVD, thanks to the National Film Archives of India (NFAI). Made by Dadasaheb Phalke a century ago, Harishchandra had its first screening in 1913 at Bombay’s Coronation Cinema. Another film, Dadasaheb Torne’s Shree Pundalik, was released in 1912, but there is some dispute on whether it’s a true film. Rather, it’s seen as a photographic recording that mimics a motion picture. The other silent films now available on DVD are Lanka-Dahan, Kaliya Mardan, Srikrishna Janma, Jamai Babu, and Martand Verma, of which Phalke produced three. In a career spanning two decades, he made over 100 silent films.

Raja Harishchandra, influenced by the style of another Raja (the painter Ravi Varma), is a tableau of scenes focusing on the king and his family as he teaches his son archery and they go on a hunt. When they enter a territory not controlled by the king, he is tested by Sage Vishwamitra. Also, Rustomji Dhotiwala’s Satyawadi Raja Harishchandra was released in Calcutta in 1917, making it the first Bengali feature film. Coming back to the present day, Shudnell Prasad’s Festival of Lights opens for a limited run in select theaters, just in time for the festivities in November. Based on a true story, the film gives us glimpses of Indo-Guyanese Americans as they grapple with changes and the challenges of assimilation. Shot in New York City and Guyana, the film is in English. A struggling immigrant mother faces a dilemma when her teenage daughter rebels and yearns to return to Guyana.